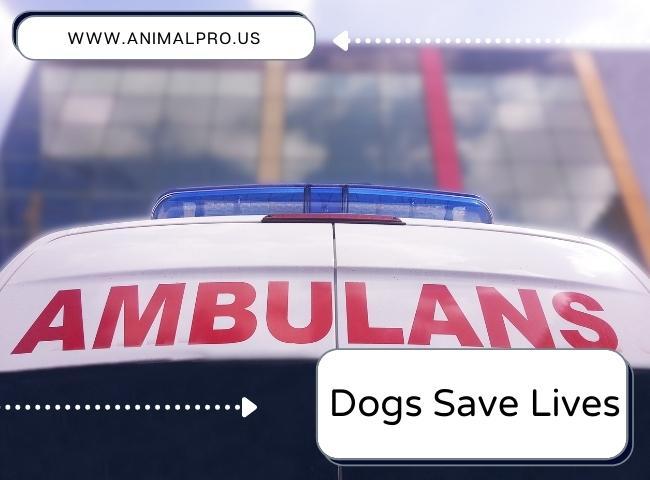 How Service Dogs Save Lives

A woman with diabetes became addicted to work and forgot to check her blood sugar – as a result, it dropped to a dangerous level. Fortunately, there is a companion trained with an excellent natural sense of smell to detect such dangers. This is her dog. Slightly touching the mistress’s leg, she gives her an alarm.

It is said that a dog is a person’s best friend, but service dogs often help owners with things that even a best friend cannot do without proper training.

In the United States, people are helped by about 500,000 service dogs. Under the United States Disability Act (ADA), service dogs must be given access to virtually everywhere their owners are sent. This allows people with disabilities to live independently and solve problems that arise in everyday life.

Service dogs can help people with visual impairments navigate unfamiliar places, can save the owner who has had an attack of the disease, calm a person with post-traumatic stress disorder and even wake him up if he has a nightmare.

Civil rights laws for people with disabilities, similar to the ADA, have been enacted in 170 countries, many of which include rules for service animals. One of these countries is Mongolia.

Linda Ball, head of the non-profit organization PawPADS from Minnesota, will visit Mongolia this fall and take one of the service dogs with her. It is necessary to disseminate information about service animals: despite the adopted laws on the disabled, very few people have them here. Linda knows of only one such dog that provides visual assistance to a US embassy staffer.

The activist hopes to change the situation and organize a dog program in Mongolia, which can be a model for other countries. According to her, during the trip she will explain that “the value of service dogs for people with disabilities is extremely high.”

The pets have a healing power and therefore can help people with multiple sclerosis to live with the disease. Among them, dogs are the favorite companion animal for many: they are great friends of the human and they make themselves loved. And it is that dogs treat us in a particular way, without judging us. Here you can check the list of benefits that having a service dog for multiple sclerosis can bring, both physically and in other important aspects of health and well-being.

Benefits of owning a dog if you have multiple sclerosis

Dogs Help Exercise: Unlike other pets, dogs need to go outside to relieve themselves several times a day and need long walks in order to enjoy a healthy life. Accompanying them on these walks is an excellent aerobic exercise.

Improve cardiovascular health: Aside from exercise, simply stroking a dog reduces heart rate and blood pressure. Several studies have found that dog owners have lower cholesterol levels and are more likely to survive a heart attack.

They are related to a more active social life: going for a walk with the dog is a great opportunity to meet new people. The parks where dogs are often taken for a run are full of people who enjoy the same hobby.

They reduce stress: petting a dog, playing with him or the simple fact of noticing his affection can reduce daily stress. Multiple studies have shown that dogs decrease the levels of cortisol, a stress-related hormone.

They provide a sense of security: in addition to alerting the presence of strangers with their barking, dogs are also protective of their owners. Dogs certainly increase the sense of security.

They provide a feeling of happiness: they are there in good times and bad. Science has shown that dog sitters tend to suffer from less depression.

They help to entertain: having a partner with whom to go for a walk on the beach, for a run or simply to play a little with the ball, entertains us and allows us to have great moments.

They increase responsibility: having a dog is a great responsibility. You have to feed him, take him out to relieve himself, he needs to be educated, etc. Having a dog requires discipline, motivation and also requires proper financial management.

The most demanded animals in service in many countries are dogs. Numerous canine units work in the security forces of the USA, Great Britain, France, Germany, Belgium.

The connection between the four-legged and her partner is important. Man not only works with the animal but also takes care of her and becomes a close friend. But psychologists note constant communication with a dog on people, because of work, are constantly under stress, produces a great positive effect. At American military bases, there are special offices where several four-legged ones are constantly located, and their main role is to create conditions for the emotional relaxation of employees.

The most popular service breeds worldwide are the German and Belgian Shepherd Dogs. They are strong, fast and hardy animals with high intelligence. Such dogs most often work in the police and serve in the army.

In the US military, service dogs are trained at Lakeland Air Force Base in Texas. In Germany, this is the responsibility of the Bundeswehr Service Kennel School. In France – a  separate canine battalion in the command of the ground forces. In the UK, the training of service dogs is carried out by the appropriate unit from the logistics brigade.

In 2005, a special installation for the training and work of service dogs –  MWD (Military Working Dogs) – was released in America. The document obliges in every possible way to prevent the service dog from falling into the hands of the enemy, and to evacuate the wounded and killed animals on equal terms with people. The installation includes instructions for providing first aid to a dog in case of injuries, including artificial respiration. In foreign armies, there are even seriously trained and specially equipped units of the veterinary service.

In some countries, service dogs are awarded military ranks, their military merits are celebrated with awards, and monuments are erected to the dead. After the end of their careers, the four-legged ones are provided with decent living conditions and even pay a pension. There are sites where people make offers to adopt former service dogs into their family and donate for their upkeep.

Several years ago, photographs of service dogs abroad on their first working day became popular on the Internet.